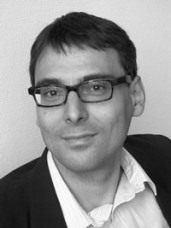 Falko Schmieder is a DAAD visiting professor at the University of Minnesota and is currently teaching the course “History of the Holocaust.” He has studied Communications, Political Science and Sociology at various German Universities. Since 2005 he has worked as a researcher at the Center for Literary and Cultural Research Berlin. Together with Matthias Rothe, the course “Adorno, Foucault, and beyond” is being offered through the Department of German, Scandinavian and Dutch. Falko Schmieder will give a lecture at the CHGS Library (room 710 Social Sciences) on The Concept of Survival on November 20th at 12 p.m.

What are the main differences between students in the US and in Germany regarding knowledge of and attitude towards the Holocaust?

After my first experiences here I would say the German students tend to know more about the historical preconditions of the Holocaust, especially the long tradition of religious anti-Judaism, and, of course they have more detailed information about German History in general. On the other hand, the students here seem to have a more emotional connection and a more political access to the subject. Many of them have come in contact with Holocaust survivors in High school, as part of their educational training, and because of the many Holocaust Survivors who emigrated to the US and started a new life here it’s a more deeper innervated history. By the way, I am very fortunate to have the Holocaust Survivor Dora Zaidenweber coming to my class to speak this semester. I attended the presentation of her book The Sky Tinged Red, and was moved to learn about her personal story. I was astonished how many young people attended this program.

What do you expect your students to come out of your course?

I would like to make them aware of two things in particular: First, that modern antisemitism has a long prehistory, which is not limited to German history; and second, that antisemitism is in no way a thing of the past. Although it might have changed some of its features, it is still relevant today – at the end of my lecture I will deal with the phenomenon of antisemitism without Jews, and I will discuss some examples of contemporary reactions on the banking crisis in Germany, in which you clearly can find a revival of old antisemitic stereotypes.

How do you approach these sensitive and difficult issues in the classroom?

In the first class, when I introduced myself to the students, I showed some photographs that I took in Berlin shortly before coming to Minneapolis. These photographs show two Berlinian Jewish institutions, and how they are monitored by surveillance cameras and by the police. The American students were very surprised to learn that it’s still necessary to constantly protect Jewish organizations and sites in this country, because of the fear (and possibility) of antisemitic attacks.

How does  Holocaust studies relate to your current research?

My current research project is on the History of the Concept of Survival, for which the Holocaust and its aftermath is of great importance. The rupture in history is reflected in the invention of many new concepts: think of “survivor syndrome,” “survivor guilt” and others, or in the disruption of traditional meanings of concepts. It is revealing that Claude Lanzmann or the well-known Spanish writer and Holocaust Survivor Jorge Semprún replaced the term “survivor” with “revenant” because older meanings of survival or survivorship no longer seemed appropriate to deal with the traumatic experiences in the extermination camps.