In July, I had the privilege of presenting at the International Association of Genocide Scholars‘ twelfth meeting in Yerevan, Armenia. The conference’s theme of comparative analysis of twentieth century genocides brought experts from around the world to Armenia’s capital city for five days of presentations, learning, and networking. More than 180 attendees, representing more than two dozen countries, shared their research and insight into many of the twentieth century’s most infamous atrocities.

The conference kicked off Thursday morning with more than 20 breakout sessions exploring themes like prevention, intergenerational trauma, perpetrator justice, and gender and sexuality. I presented research I did this past spring, comparing themes of nationalism in pre-genocide late Ottoman and early American politics. University of Minnesota alumna and current Ohio State sociology professor Dr. Hollie Brehm presented her research analyzing rates of violence at a community level during the Rwandan Genocide.

My favorite session was the cultural genocide breakout. The presentations primarily focused on the continuing destruction and appropriation of Khachkars, ornate stone crosses, and Armenian churches that are scattered across modern Turkey. The presenters brought different and insightful perspectives to the session; an art historian talked about the effect the destruction from an artistic perspective and an Armenian PhD student shared her research from the viewpoint of the Armenian people. There was a great conversation that followed, discussing the limits of the legal definition of genocide versus Raphael Lemkin’s original ideas. The session was moderated by Dr. Adam Muller of the University of Manitoba. Dr. Muller will be visiting the University this fall to discuss his virtual museum project which sheds light on the residential schools for Canada’s First Nations people. 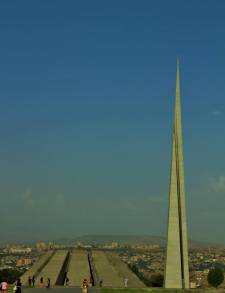 On Thursday evening, we were given a tour of the renovated Armenian Genocide Museum and Tsitsernakaberd, Armenia’s official memorial site. Visiting the museum had a tremendous effect on me. It was a reminder of the human toll of the first genocide of the twentieth century, something I had only experienced through books and documentaries. The museum recently opened its expanded exhibit with new photographs, artifacts, and testimonials in time for the commemorative events marking the 100th anniversary of the genocide. The tour was led by Dr. Hayk Demoyan, the director of the museum and organizer of the conference.

The conference came to an end on Sunday with the unveiling of a stamp by the IAGS executive committee and the Armenian Postal Service, commemorating the conference. Sunday was also Vardavar, the Armenian water festival in which kids toss water on unsuspecting passersby. The soakings made for a refreshing end to an incredible, and hot, conference in Yerevan.

Created in 1994, the International Association of Genocide Scholars is one of the world’s largest groups dedicated to gaining a greater understanding of episodes of genocide and mass atrocities. In 2001, the University of Minnesota hosted the conference. IAGS’ next conference will be in July 2017 in Phnom Penh at the newly opened Sleuk Rith Institute which is Cambodia’s permanent research center dedicated to the Cambodian Genocide.

Joe Eggers is a graduate student at the University of Minnesota, focusing his research on cultural genocide and indigenous communities. His thesis project explores discrepancies between the legal definition and Lemkin’s concept of genocide through analysis of American government assimilation policies towards Native Nations.