The idea of reviving a historical figure to return from the dead to our own time period is not new.  Many novels and films have dealt with this premise before though usually they focus on the return of someone likable. In the German film Look Who’s Back (Er ist wieder da) we get Adolf Hitler in Berlin circa 2014.

Billed as a comedy, Look Who’s Back opens in the clouds, reminiscent of Leni Riefenstahl’s 1935 propaganda masterpiece Triumph of the Will. At first, Look plays like a science fiction film around the return of the deceased. It turns into a buddy-road picture, as Hitler and the recently fired, down-on-his-luck filmmaker Fabian Sawatzki (played by Fabian Busch) drive about Germany in Fabian’s mother’s floral delivery van. They film people’s reactions to Hitler in the hopes that Fabian can get the footage on the air at the TV station that fired him. (These scenes are actual reactions of unsuspecting people on the street to Hitler as played by the actor Oliver Masucci.) Is it a comedy? Yes. Is it funny? Yes. There are laugh-out-loud moments, several moments of uncomfortable laughter, as well as a few cringe-inducing scenes.

Satire is about making us laugh to see truth and the film certainly does this. The film does not focus on Hitler as a returning hero, everyone who first sees Hitler thinks it is a joke that he has to be a comedian. Hitler in Germany in 2014, walking about in uniform? Who in their right mind? Of course people clamor to take selfies and photos with Hitler. They later discuss hatred of foreigners and immigrants with him and converse on the sad state of affairs they all find themselves in, and Hitler, being “a man of the people,” nods, agrees and asks people to follow him. Of course his biggest enthusiasts are mainly drunken football fans or people in bars. No one is taking him seriously-until he gets himself on TV. Hitler is dismayed by the state of television programming. Great propaganda tool being wasted on cooking shows! ”Goebbels is spinning in his grave,” and of course TV is willing to oblige, here after all is something everyone will be talking about. Good or ill there will be ratings and ratings equal money and success.

A newly appointed head of a local TV station (a 21st century Riefenstahl) thinks Hitler would be a great fit for their comedy Krass Alter (Whoa Dude!) Jews are off limits, as “they are not funny,” but everything else is fair game and Hitler readily agrees. The show’s host is not pleased to be upstaged by a Hitler look-alike, and voices his displeasure as he is being made up in “Black Face” to do an impression of President Obama and a crazed terrorist.  Hitler uses the big moment to declare war on television. The audience laughs uncomfortably at first but then begins to realize they agree with him on how appalling TV programming is. Based on the success of the broadcast he is added to every show they have, spouting his views on politics, culture and whatever else he sees fit, all in the name of “Making Germany Great Again.” The media frenzy that follows  is one in which people begin to consider what he is saying as truth, and it is refreshing to hear the truth, even if it is coming from Hitler.  Not everyone is okay with the success, some for legitimate reasons (We are promoting Hitler!) others like the deputy director at the station (who is upset about being passed over for a promotion) tries to foil Hitler’s success, leading to his own “Downfall” which plays out brilliantly in an homage to the much parodied bunker scene from that film.

You cannot help but think about our current election coverage while watching Look Who’s Back. Over a year ago I recall watching John Stewart and other comedian’s rub their hands together gleefully over the prospect of a Donald Trump run for president, “comedy gold” a “comedian’s dream.” TV, social media, and print have all covered him tirelessly eagerly awaiting to see what outrageous thing he will say or do. He has turned the televised debates into shouting matches. The Trump campaign has been short on substance, but big on ratings. However, as we edge closer to November and the actual election it appears the candidate who was to be little more than a good punchline is now a legitimate contender for the presidency.  Though I will not go as far to compare Trump to Hitler (that has already been done on several occasions, including the comedian Louis C.K. with little effect on him or his followers) one can certainly see the danger in accommodating anyone who spews hatred to see how far they will go and who they get to support them in the process.

The film is more of a reminder of how surface orientated we can be, easily led by the media and public opinion.  The film goes as far to state that it is Germany that made Hitler and they keep him alive and well, as he lives in all of them. I would argue it is also true outside of Germany. 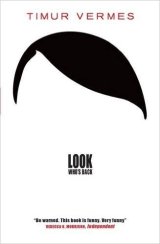 There is an international cultural obsession with him.  In my own classroom I’m reminded how much students are fascinated with Hitler as they ask me endless questions related to what they have seen on countless TV shows, featured films, or documentary style films (dressed as legitimate history).  Let’s face it- Hitler sells! In Germany, Look Who’s Back was a hit at the box office and the book it was based on of the same name by Timur Vermes has sold over 1.5 million copies for the cost of $19.33. (Yes it was intended).

Therefore, it is no surprise that the only one to truly see through the façade in the film is an elderly Jewish woman suffering from dementia who becomes quite lucid when Hitler visits her home. While calling him out for the horrible person he is, her granddaughter, who works at the TV station remarks, “not to worry it is just a joke,” her grandmother’s reply, “yes we thought he was a joke at first too, but look how that turned out.” Now that is a truth we can all comfortably agree with.

Jodi Elowitz is an adjunct professor of the Humanities at Gateway Community College in Phoenix, Arizona and the Content Coordinator for the Center for Holocaust and Genocide Studies (CHGS) at the University of Minnesota. Ms. Elowitz’s area of expertise is artistic representation of the Holocaust in the visual arts with an emphasis on work done in the camps and ghettos. Current research is on Holocaust memory in animated film and the Holocaust in Polish Memory, particularly in film and tourism. Her most recent article “Seven Minutes in the Warsaw Ghetto: Representing the Unimaginable through Animated Film” was published in Short Film Studies Journal Volume 4, Number 2, 2014.