Yagmur was born and raised in Istanbul and graduated from Bogazici University. After graduating with an MA degree at Koc University she moved to Minneapolis to start her PhD studies in Sociology. As a student of cultural sociology, she is interested in collective memory, nostalgia, and the role of emotions in remembering. While Yagmur was the 2015-2016 Badzin fellow in Genocide and Holocaust Studies, she worked on a comparative project with Alejandro Baer on Holocaust Commemoration in Spain and Turkey, which they presented at several venues including the Holocaust, Genocide, and Mass Violence interdisciplinary graduate workshop and American Sociological Association’s annual conference. Currently they are working on turning the research into a paper. 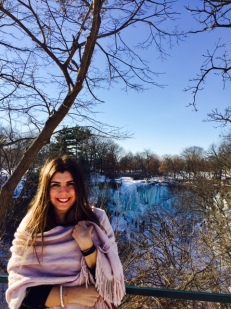 In Turkey, nostalgia for the Ottoman Empire, across both popular and political domains, marks a drastic shift from the early 20th century vision of history, which cuts ties to the Empire. Yagmur’s qualitative multi-method dissertation examines how political leaders use nostalgia to consolidate power, and simultaneously explore the limits of monopolizing history. She argues that state-led neo-Ottomanist collective memory practices serve as a mechanism of socialization that helps the citizens build an emotional attachment to the state. Yet, popular cultural forms such as television series provide their own version of this history, to be interpreted and reworked by an increasingly polarized Turkish society, indicating the limits of state control of collective memory.