Erma was born in Bosnia, raised in Croatia, and moved to Idaho as a refugee at the age of 14. She graduated with a double BA in Spanish and Social Science from Boise State University. She earned her MA in Spanish from the University of Oregon, and in 2012, she began her PhD in Spanish at the University of Minnesota. Erma is interested in issues of mass violence, collective memory and nationalism in contemporary Spain. She has been involved with the Holocaust, Genocide, and Mass Violence interdisciplinary graduate group since its inception and has served as the group coordinator and Research Assistant for the Center for Holocaust and Genocide Studies. 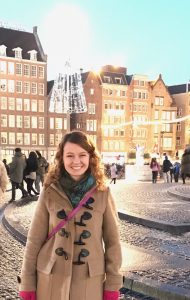 Erma’s current research examines Spanish cultural representations of the wars in the former Yugoslavia that took place in the 1990s. Her work is comparative, and based on the observed parallel experiences the two countries have gone through during the twentieth century including dictatorships, civil wars, and struggles over memory and transitions to democracy. As a literary and cultural scholar, Erma studies the way Spanish authors, journalists and photographers approach the Balkan atrocity as a symbolic reliving and reflection on old Spanish traumas such as the Spanish Civil War (1936-39) and Franco’s fascist regime. She will be defending her dissertation this semester.