This month, Jodi Elowitz shares three selections that explore the obsession with Adolf Eichmann in film.

As we watch neo-Nazis and white supremacists on our TV’s and in our news feeds it might be a good time to reacquaint ourselves with the original Nazis and just what happens when we remain silent. On Netflix, we can watch The Eichmann Show (2015), which portrays the decisions made towards filming the 1961 trial of Adolf Eichmann, head of Jewish Affairs, who was responsible for deporting the Jews of Europe to their deaths. In the aftermath of liberation, Eichmann fled Europe and went into hiding in Argentina, until he was kidnapped by Mossad agents and brought to trial in Israel. The Eichmann Show, produced by BBC, stars Martin Freeman as producer, Milton Fruchtman, and Anthony LaPaglia as director, Leo Hurwitz. Both excellent actors have little acting to do since they take a lesser role to the integrated footage from the actual trial. The screen alternates from black and white to color as we move from the actual footage to the representational courtroom. Mainly focused on the arguments between Hurwitz and Fruchtman on the purpose of the filming, we are shown the obsessive nature of both men on a mission. Hurwitz is determined that the camera and the magic of film will compel Eichmann to show us his soul and that we will see a moment of recognition and regret for his crimes. Fruchtman is less concerned with finding Eichmann’s humanity as he is televising the “trial of the century.” He is more focused on the emotional impact of the recounting of the horrors of the Holocaust by the survivors. The trial was important for both playing a role in our understanding of the Holocaust, and because it was the first televised world news event, which would lead to other televised “trials of the century.” The trial is important because it helped us understand that those who died did not go like sheep to the slaughter, and it helped lift the stigma attached to survivors (especially in Israel), as the Nazi crimes were explained in full detail by those who experienced it firsthand.

END_OF_DOCUMENT_TOKEN_TO_BE_REPLACED

A competent accomplished woman goes up against a populist outsider who has created a reputation built on lies.  Sound familiar? Maybe, but this is not about the 2016 US election: it is the plot of the film Denial (2016), based on the true story of the trial between Jewish Studies and Holocaust scholar Deborah E. Lipstadt and British Holocaust denier David Irving.

There is no denying that Denial is a film for our times. Conceived nine years ago, and filmed in 2015, the parallels between the trial and the President election is not lost on viewers. Frustratingly, we do seem to live in a time in which history is ignored, facts seem like an inconvenience and there is a prevailing ideology – that one’s opinion is more important, regardless if you can back it up with facts or not.  What happens in this scenario is that there can be no debate between anyone because those espousing opinion, cannot rationally articulate their argument against those who cite facts.

END_OF_DOCUMENT_TOKEN_TO_BE_REPLACED

This month, Jodi Elowitz shares five selections that explore recent Holocaust fiction and documentaries from a variety of perspectives.

What Our Fathers Did: A Nazi Legacy (2015) is a documentary based on the article My Father, the Good Nazi (2013) written by British Lawyer, Phillipe Sands in the Financial Times Magazine. The article discusses the relation of Niklas Frank, son of Hans Frank, Governor General of occupied Poland (General government) and Horst von Wächter, son of Otto von Wächter, District Governor of Krakow, Poland and later District Governor of Galicia during World War II. Both men were responsible for overseeing the extermination of Jews and charged with war crimes. Frank stood trial at Nuremberg and was found guilty on counts three and four (war crimes and crimes against humanity), sentenced to death, and executed on October 16, 1946. Wächter escaped prosecution and died while hiding in Rome in 1949.

END_OF_DOCUMENT_TOKEN_TO_BE_REPLACED 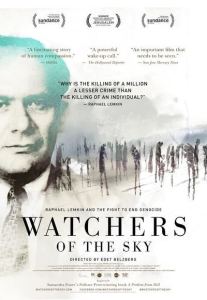 Six decades after he first coined the term genocide, Raphael Lemkin’s life has made it to the silver screen. In Watchers of the Sky director Edet Belzberg takes viewers through the efforts of Lemkin to get the crime of genocide recognized by the international community and the United Nations.

Throughout the movie, activists, scholars and experts share their reflections on the legacy of Lemkin’s tireless dedication to pursuing justice for victims of atrocities around the world. Among those interviewed is Samantha Power, U.S. Ambassador to the UN and author of A Problem from Hell, which served as an inspiration for the documentary. END_OF_DOCUMENT_TOKEN_TO_BE_REPLACED

You are not obliged to complete the work, but you are not free to desist from it either.

–Rabbi Tarfon (from the Talmud)

On February 6, as part of the IAS Collaborative Reframing Mass Violence lecture series, CHGS partnered with the Human Rights Program and the Film Society of Minneapolis/St. Paul for a screening of the documentary film Granito: How to Nail a Dictator .  A discussion with its director, Pamela Yates, and producer, Paco de Onís followed.  Granito tells a breathtaking story of courage and perseverance in the pursuit of justice that uniquely embodies the quote above from the Talmud.

The film spans thirty years as five protagonists in Guatemala, Spain, and the United States attempt to bring truth, memory, and justice to the violence-plagued Central American country. A US filmmaker, a forensic anthropologist, a Spanish lawyer, a Maya survivor, and a Guatemalan witness activist each become a “granito,” a tiny grain of sand, adding up to an extraordinary accomplishment three decades after the atrocities: the indictment and trial of ex-dictator General Ríos Montt, former de facto president and responsible for a genocidal campaign that killed thousands of indigenous Guatemalans during the bloodiest phase of a war against the leftist guerrillas in 1982-1983. On May 10, 2013, Ríos Montt was convicted of genocide and crimes against humanity. It was the first time a former head of state had been found guilty of genocide by a court in his own country.

The last chapter of this Guatemalan story is yet to be written. Only ten days after the ruling, the Constitutional Court of Guatemala overturned the conviction under pressure from an organization representing the country’s deeply reactionary oligarchy.

Still, the judgment marked a turning point in Guatemalan history, and it has also become part of the history of human rights. It sends a clear message to other parts of the world where present or former perpetrators still live in freedom and privilege despite proven involvement in atrocious crimes. It also teaches an important lesson: As a collective effort, step by step or “grain by grain,” even in Guatemala-one of the most profoundly unjust societies in the Americas-justice can be achieved.

Alejandro Baer is the Stephen C. Feinstein Chair and Director of the Center for Holocaust and Genocide Studies.